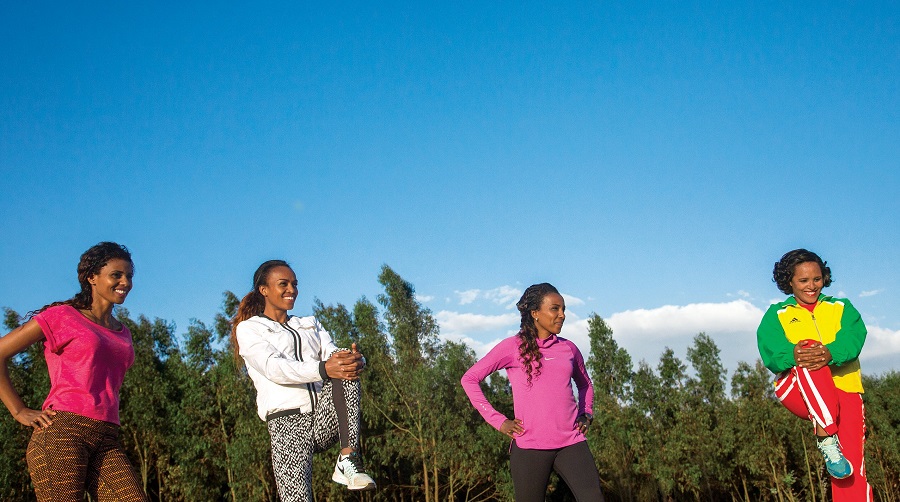 Ethiopia is a running-mad country—but it’s never seen anything like the Dibabas. Chloe Malle heads to Addis Ababa to meet the fastest family on the planet.

The only sound at the top of the Entoto Mountains is the thwack of a cowherd’s staff against the tree trunks as he leads his small herd of oxen home. I am doing my best to keep pace with Tirunesh Dibaba, 30, and her younger sister, Genzebe, 25, two wisplike Ethiopians with wide smiles and a fiercely close bond who may be the most formidable female track stars in the world. In the late-afternoon light high above central Addis Ababa, we zigzag between the majestic eucalyptus trees, paying heed to the uneven ground below and staying alert for the not-uncommon hyena sighting—no problem, the sisters assure me, as long as you clap loudly and throw a rock in the animal’s direction.

The Dibabas’ dominance in the field of distance running has captivated the track-and-field community. “There are a few running families, but not like the Dibabas,” says the Ethiopian track legend Haile Gebrselassie. These are the only siblings in recorded history to hold concurrent world records, and they are as charmingly unassuming in person as they are fearsome on the track. The sisters were raised three hours south of here, in a tukul, or round mud hut, without electricity—their parents subsistence farmers growing teff, barley, and wheat. Their mother, Gutu, credits her daughters’ success to a loving environment as well as a steady supply of milk from the family cows.

In fact there are seven Dibaba siblings, and all of them run. “What the Dibabas have is what Serena and Venus have, except there are more of them,” says Ato Boldon, NBC’s track analyst. “It’s not a stretch to say they are the world’s fastest family.” Tirunesh is the most decorated, with three Olympic gold medals; Genzebe is tipped to win her first in Rio. Their older sister, Ejegayehu, 34, is an Olympian, too, with a silver from Athens, and their cousin Derartu Tulu was the first black African woman to win an Olympic gold, in the 1992 games. “World records, Olympic medals, world championships—the Dibabas’ accomplishments are unprecedented in this sport,” says Boldon.

With Rio on the horizon, the focus is squarely on Tirunesh and Genzebe. This is Tirunesh’s comeback season after taking a year off to raise her now one-year-old son, Nathan; meanwhile, Genzebe had a record-breaking summer, decimating the competition in August’s world championships and winning IAAF’s Athlete of the Year award, a crowning glory in the sport. “Last year Genzebe was head and shoulders the best athlete in the world,” says race coordinator Matt Turnbull, who has worked with the Dibabas for almost a decade. “And with Tiru being out for so long now, people are excited to see what will happen. They’re a fiercely competitive family, and they really dictate the landscape.”

As modest (and petite) as the Dibabas are face to face, they are outsize celebrities on the chaotic, construction-clogged streets of Addis Ababa, where they travel by car to avoid being mobbed. Their arrival at their favorite restaurant, Yod Abyssinia, is greeted with hushed whispers (“Dee-ba-ba, Dee-ba-ba”) and reverential stares. The sisters duck under the restaurant’s theatrical thatched straw canopies and take a table against the wall, smiling patiently as a young man approaches and asks for a photo. Afterward Tirunesh takes out her iPhone 6 Plus—one of the few in the country, bought in Europe—her cerise-lacquered nails clacking against the screen as she swipes past the photo of chubby Nathan. For a night out, she’s neatly coordinated in skinny red jeans, a black blazer with white piping, and similarly duo-toned wedge sandals. She admits that she loves to shop when she is competing abroad, particularly on Newbury Street in Boston and at any Michael Kors store. Genzebe, who prefers Zara, compensates for her timidity with a sweet attentiveness. Her feet look tiny in black ballerina slippers with grosgrain bows over the toe box. She has replaced her Garmin GPS training watch with a gold one whose pavé diamond–ringed face takes up the entire width of her narrow wrist. Both women have braids in their thick hair and giggle while confirming that they share a hairdresser. Their respect and affection are obvious: Genzebe lives with Tirunesh, sharing a bedroom with her baby nephew, and when she becomes flustered following a question about her love life, Tirunesh protectively steers the conversation elsewhere. (For the record, Genzebe has a boyfriend, but he is not a runner, and she doesn’t want to talk about him.)

When Tirunesh’s husband, fellow track-and-field Olympic medalist Sileshi Sihine, appears, cool and handsome in tailored jeans and a shawl collar cardigan, another frisson of excitement ripples through the room. His and Tirunesh’s 2008 wedding ceremony was a nationally televised event, drawing half a million people to the city’s main square, where Olympic races are broadcast to huge crowds. The bride wore a lace-embroidered bustier top and a millefeuille tulle ball skirt; the groom, an iridescent gray pin-striped morning suit—all purchased on a trip to Milan. They don’t remember the name of the clothier, “but one of the best,” Sihine says authoritatively. “We know people.” Restaurant patrons lock their eyes on us as Sihine slips onto the low wooden stool next to his wife, squeezing her knee in greeting.

As the string notes of the krar fill the room and dancers take the stage to perform an Ethiopian eskista dance—a shoulder-snapping feat of timing and rhythm—I ask Tirunesh what music she likes to listen to. “Michael Jackson,” she answers with a sly smile. “He is my favorite,” the last word pronounced in three crisp syllables. At this Genzebe, breaking her shell of shyness, speaks up: “For me, Beyoncé.”

Their status—and status symbols—marks a stark contrast between the Dibabas and most others in this still highly impoverished country. Yet Ethiopia has the fastest-growing economy in sub-Saharan Africa, and Addis, with its ubiquitous eucalyptus-pole scaffolding and ragged blue construction tarps, is a riot of development. Like many of the nation’s successful track stars, the Dibabas and their in-laws have invested their fortunes back into their city; they are burgeoning real estate tycoons, owning multiple buildings in the capital—including the five-star Tirunesh Hotel, slated to open this fall on Bole Road, the Fifth Avenue of Addis. 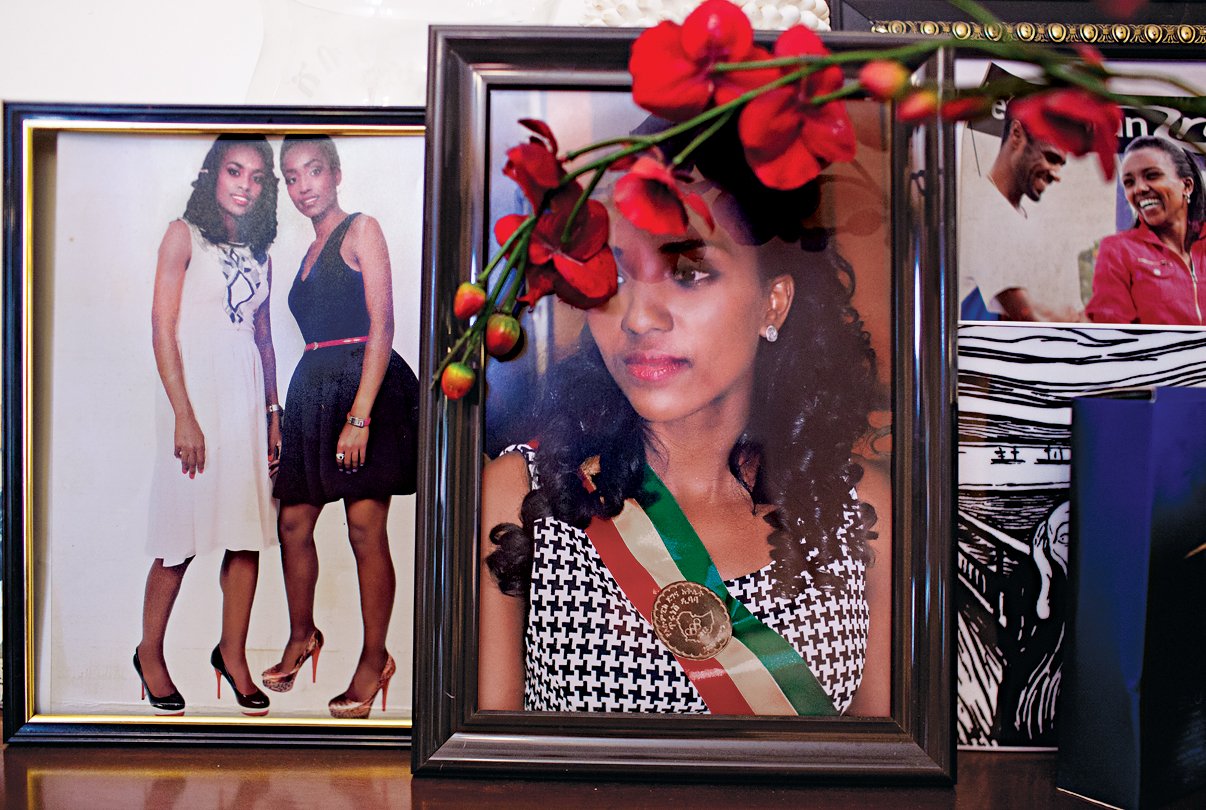 Genzebe, in red, with Tirunesh and her husband, Sileshi Sihine—also an Olympic runner—and their son, Nathan.

Along with Kenya, Ethiopia is a powerhouse for turning out elite runners. According to David Epstein, author of The Sports Gene: Inside the Science of Extraordinary Athletic Performance, much of the two countries lies in an altitude “sweet spot”—around 6,000 to 9,000 feet. “High enough to cause physiological changes but not so high that the air is too thin for hard training,” Epstein says. As NBC’s Boldon explains, “When the Dibabas come down to sea level—I’m not going to say it’s like Superman coming from Krypton, but it is a version of that.” There’s also the Ethiopian diet, with its reliance on the iron- and calcium-rich grain teff, and the typical Ethiopian body type, petite and narrow, which is ideal for the sport: Tirunesh is five feet three and 110 pounds; Genzebe is five feet five and 115 pounds. “They have a lot of fight in a very small lightweight frame,” says Boldon.

“If you compared them to a car, they would be a Ford Focus with a Ferrari engine.”

Genzebe’s Ferrari engine is in top gear at Addis’s only track stadium for an 8:00 a.m. workout. The sun is already high overhead, and she is warming up with her nineteen-year-old sister Anna. They move at a focused, steady clip, their legs in sync, so that from across the track they look like one person, Anna’s smaller frame blending into Genzebe’s. As they speed up, moving seamlessly into sprints on the straightaways, Genzebe’s strides are precise, a strict economy of energy and movement. The two finish the warm-up and plop down on the tartan track to shimmy out of their Nike leggings, casual in their cotton underwear as they pull on micro shorts, the pink swoosh on Genzebe’s matching her fuchsia Dri-Fit T-shirt.

The ensuing workout is a series of 20 400-meter sprints, timed by a national team coach, who jots down intervals in red ballpoint on his palm. Genzebe shaves off seconds with each rep, her muscles taut as bowstrings as she catapults herself across the finish line. Afterward it’s back to Tirunesh and Sihine’s impressive home, a two-story stuccoed mansion in one of Addis’s gated communities. Inside, framed photos of family members on victory podiums take pride of place, and a flat-screen TV plays yesterday’s Africa Cup soccer match, but Tirunesh explains that she doesn’t particularly like watching sports. She and her sisters prefer Amharic films. What American films does she like? “Anything with Angelina Jolie.” A large breakfast—traditional Ethiopian firfir and eggs—is followed by a nap, lunch, and then it’s off to the gym. They are on two workouts a day until Rio.

The air in Entoto, unlike the exhaust-choked streets of Addis, is crisp and clean—and also thin at 10,000 feet above sea level. When we gather for our late-afternoon run, the Dibabas’ cousin Tulu arrives on the mountaintop, now retired and looking more soccer mom than Olympian. The sisters cite her as their inspiration, and her lilting voice boomerangs through the trees as they jog together into a cattle clearing. Tulu, who won the New York City marathon in 2009 at the age of 37, is a gregarious and outgoing foil to the soft-spoken Dibabas. When asked whom she will cheer for if Tirunesh and Genzebe compete against each other in Rio in the 5,000 or 10,000, Tulu does not hesitate and squeezes Tirunesh’s shoulder. “She! She is my favorite!” then looks lovingly across at Genzebe: “I am sorry!” Genzebe remains diplomatic, saying only, “The strongest will win,” while Tirunesh explains that they likely won’t be in the same heat and then looks into the sun, which is dipping behind the crest of the mountain. “But we come to win, so. . . . ” She shrugs; the end of the sentence is unnecessary.

There’s an intimacy up here as we jog among the dappled eucalyptus, the Ethiopians slowing their pace to a relative shuffle while I wheeze from the effort and altitude. “We are always together,” says Tirunesh. “Maybe one day a week we aren’t together.” For all of their bashfulness, the sisters share a mischievous humor that they sometimes let loose on interlopers like myself. At the end of our run in Entoto, Tirunesh, jogging behind me, yells, “Hyena!” with authoritative urgency. I shriek, whipping my head around. When I look back at the girls, they are doubled over laughing, the only animal in sight a weary pack mule trudging slowly across the horizon.